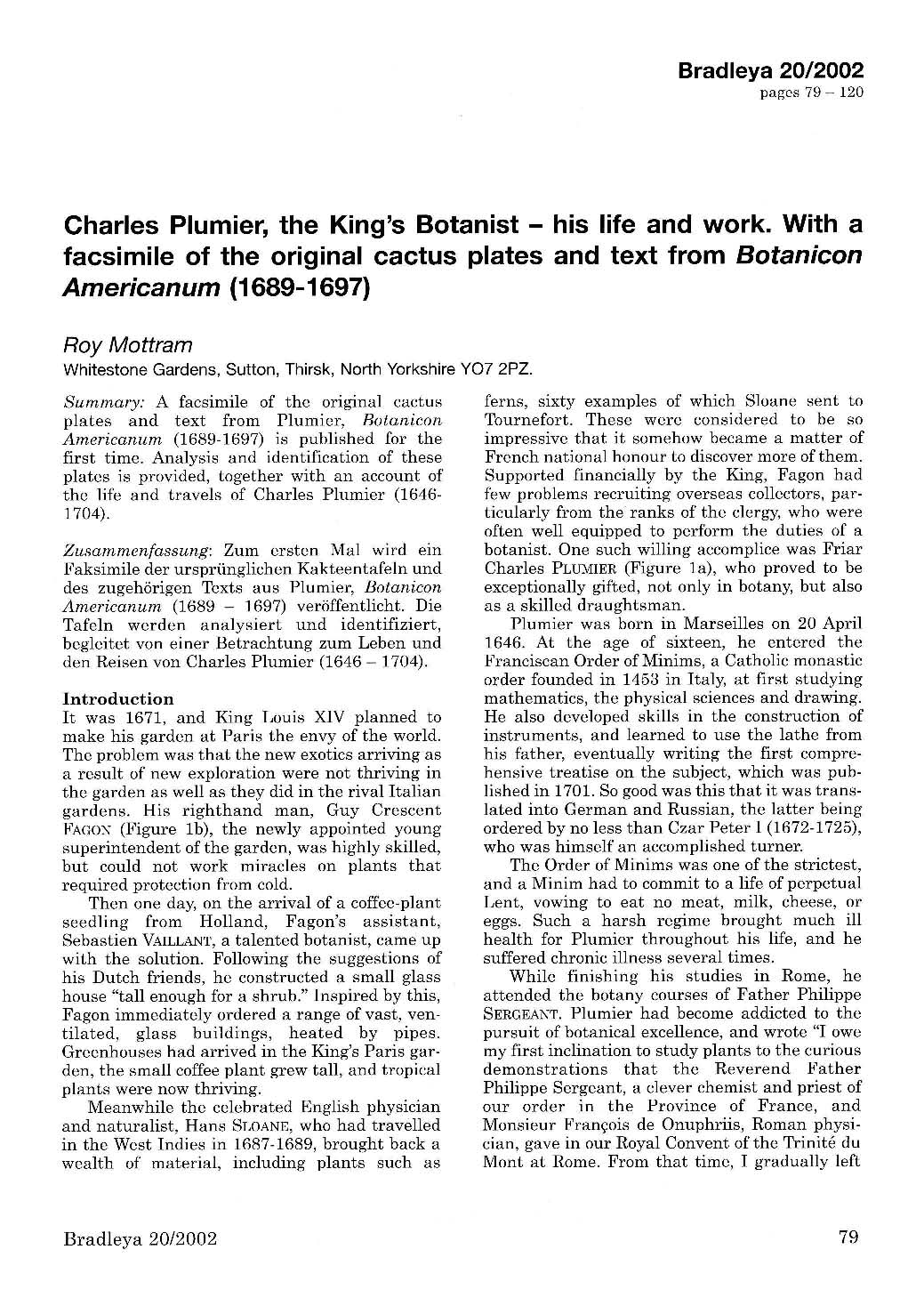 Charles Plumier, the King's Botanist - his life and work. With a facsimile of the original cactus plates and text from Botanicon Americanum (1689-1697)
Roy Mottram

Introduction
It was 1671, and King Louis XIV planned to make his garden at Paris the envy of the world. The problem was that the new exotics arriving as a result of new exploration were not thriving in the garden as well as they did in the rival Italian gardens. His righthand man, Guy Crescent FAGON (Figure lb), the newly appointed young superintendent of the garden, was highly skilled, but could not work miracles on plants that required protection from cold.
Then one day, on the arrival of a coffee-plant seedling from Holland, Fagon's assistant, Sebastien VAILLANT, a talented botanist, came up with the solution. Following the suggestions of his Dutch friends, he constructed a small glass house "tall enough for a shrub." Inspired by this, Fagon immediately ordered a range of vast, ventilated, glass buildings, heated by pipes. Greenhouses had arrived in the King's Paris garden, the small coffee plant grew tall, and tropical plants were now thriving.
Meanwhile the celebrated English physician and naturalist, Hans SLOANE, who had travelled in the West Indies in 1687-1689, brought back a wealth of material, including plants such as ferns, sixty examples of which Sloane sent to Tournefort. These were considered to be so impressive that it somehow became a matter of French national honour to discover more of them. Supported financially by the King, Fagon had few problems recruiting overseas collectors, particularly from the ranks of the clergy, who were often well equipped to perform the duties of a botanist. One such willing accomplice was Friar Charles PLUMIER (Figure la), who proved to be exceptionally gifted, not only in botany, but also as a skilled draughtsman.

Plumier was born in Marseilles on 20 April 1646. At the age of sixteen, he entered the Franciscan Order of Minims, a Catholic monastic order founded in 1453 in Italy, at first studying mathematics, the physical sciences and drawing. He also developed skills in the construction of instruments, and learned to use the lathe from his father, eventually writing the first comprehensive treatise on the subject, which was published in 1701. So good was this that it was translated into German and Russian, the latter being ordered by no less than Czar Peter I (1672-1725), who was himself an accomplished turner.
The Order of Minims was one of the strictest, and a Minim had to commit to a life of perpetual Lent, vowing to eat no meat, milk, cheese, or eggs. Such a harsh regime brought much ill health for Plumier throughout his life, and he suffered chronic illness several times.
While finishing his studies in Rome, he attended the botany courses of Father Philippe SERGEANT. Plumier had become addicted to the pursuit of botanical excellence, and wrote "I owe my first inclination to study plants to the curious demonstrations that the Reverend Father Philippe Sergeant, a clever chemist and priest of our order in the Province of France, and Monsieur François de Onuphriis, Roman physician, gave in our Royal Convent of the Trinité du Mont at Rome. From that time, I gradually left